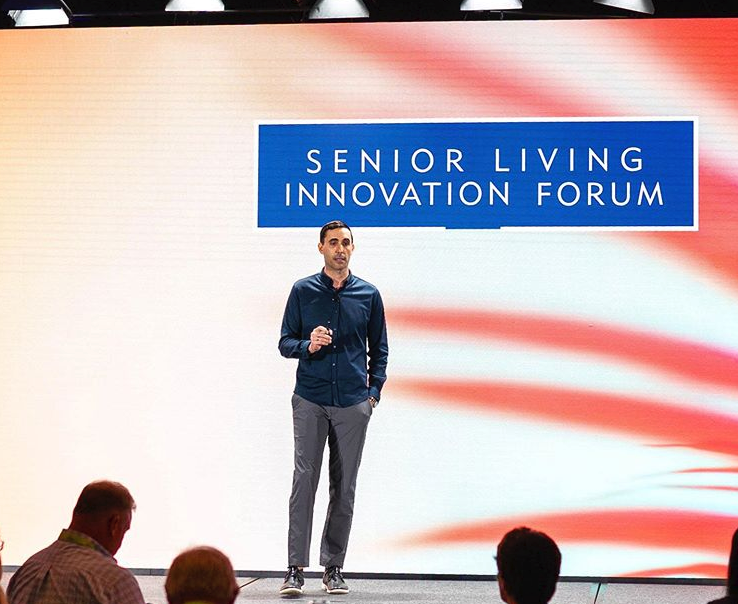 As industry after industry is disrupted by technological innovations, shifts in demographics, and new modes of thinking, experts gathered at the Senior Living Innovation Forum (SLIF) and declared that senior housing is now reckoning with a disruption of its own. An invitation-only event, SLIF took place in Santa Barbara, California on June 24 and 25 and included executives from the nation’s top senior living providers. The topic on everyone’s lips was what the future holds for senior living. While opinions differed on the details, the general consensus was that major changes are happening. As Charles Turner, CEO at Invidia for Seniors and moderator of the SLIF keynote panel discussion, puts it, “Disruption is here. Tectonic shifts are affecting our industry that we are not prepared for.”

Among those in attendance at the event were Paul Griffin III, President and CEO of Griffin Living, and John C. Terando, Griffin Living’s SVP, Western States. Both have been active in developing and operating senior living communities since Griffin Living’s inception in 2009 and both felt that what they heard at SLIF validated what they are seeing in the current senior living market place. John Terando explains, “As Baby Boomers enter the senior living market, they have a differing perspective as to what they require compared to their parents. They want more intergenerational and purpose-driven interactions within the community. They want continuing education opportunities. Larger living spaces with more amenities that allow for more choices are becoming the norm for successful senior communities.”

One of the highlights of SLIF was a presentation by Marriott’s Lionel Sussman that discussed activating a space’s lobby, meaning making the lobby an activity space as opposed to a space that people simply pass through. Paul Griffin states, “Lionel’s talk confirmed our efforts to ‘activate the lobby’ so we can use that space flexibly to provide multiple activities as opposed to the first formal lobby we first designed that looks beautiful but doesn’t get fully used.” Paul continues, “For Griffin Living, it’s all about creating spaces that inspire purpose-focused living. Senior living providers need to develop spaces and activities that have a sense of purpose behind them be it small ones, like looking forward to the next family dinner provided by us, or bigger ones, like developing friends and social connections that bring greater meaning and fulfillment to their new home and community.”

John Terando summed up the feeling of many at the conference saying, “We don’t want to be obsolete the day we open a community, so we’re committed to not doing the same repetitive thing the industry has been doing for years. One of the most direct and impactful takeaways from the Senior Living Innovation Forum was a well-timed quote of Bill Gates delivered by Bob Kramer, founder of N.I.C., and used to drive home his point about innovation and change. ‘We always overestimate the change that will occur in the next two years and underestimate the change that will occur in the next ten. Don’t let yourself be lulled into inaction.’ We don’t want to be lulled into not listening and anticipating the big changes coming in our industry.”